Longtime readers might remember when I blogged in 2011 about the death of an Alaskan wolf named Romeo.  Romeo was an Alexander Archipelago wolf. 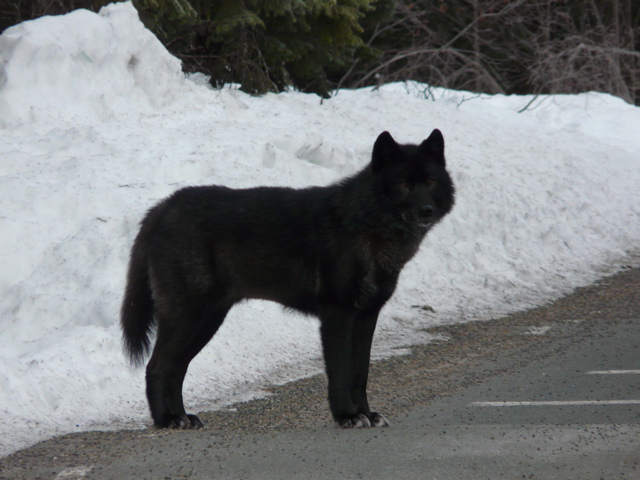 The Alexander Archipelago wolf (Canis lupus ligoni) is a rare subspecies of the gray wolf. It is unique to the islands of southeastern Alaska, and is the only wolf found in the Alaskan portion of the largest remaining tract of temperate rainforest in the world. Importantly, it is an apex predator, living almost exclusively off of Sitka black-tailed deer (Odocoileus hemionus sitkensis), a subspecies of mule deer. They may also take moose, small mammals, birds, and a surprising amount of salmon.

The Alexander Archipelago wolf is exceedingly rare, with fewer than 1000 wolves left in Southeast Alaska.  A recent survey of Prince of Wales Island found the population had dropped from 250-300 individuals in 1996 to such a low number that frequency of scat and other wolf signs were almost too low to measure. The current (unconfirmed) suggestion is that there are about 150 animals left on the island.

This week John Platt over at Scientific American’s Extinction Countdown Blog reported on a recent study that revealed some dire information about the subspecies.

Over the past year one of the most important populations* of Alaska’s Alexander Archipelago wolves (Canis lupus ligoni) has plummeted from 221 to as low as 60, according to data released last week. As a result, conservation groups—which have sought to protect the rare wolves under the Endangered Species Act for years—are now calling for emergency steps to preserve the few wolves that remain.

* John is referring specifically to the wolves on Prince of Wales and related islands. Alexander Archipelago wolves also exist on a few other islands and the nearby mainland.

What’s happening to these wolves?  The problem is a perfect storm of threats that doesn’t seem to have a simple solution.

For now it seems safe to say that the outlook for these wolves seems dire. The logging companies have been uniformly successful in continuing to log the islands.  All efforts to have the Alexander Archipelago wolf listed under the Endangered Species Act have failed. Hunters are still able to take a sizable number of animals.

And finally, illegal hunting continues to take its toll on the species the same way it did to Romeo.